According to a recent study in JAMA Pediatrics, 45% of teens who vape want to quit. These teens need help and support to quit successfully, but they may not feel ready to enroll in a traditional cessation program. Plus, it’s hard to face a problem that started socially… alone. In our recent webinar, we provided a sneak preview into a social-first, teen-first, vaping-first intervention developed in partnership with Rescue Agency, Hopelab, and UCSF: Quit the Hit. Here are three key takeaways from this presentation.

The cessation journey is vastly different for teens than adults

In our most recent rounds of research, we started noticing a gap emerge in what some teen vapers needed to quit. Some weren’t 100% ready to quit yet or wanted to just learn more about how it would work. They expressed hesitations about calling a quitline because it feels “too formal” and like they “have a serious problem” if they call. Some also seemed concerned that their parents might find out.

We also found that teens feel alone in the quitting process, many believing they are the only person in their friend group who wants to quit. Others were hiding vaping from parents, coaches, and support systems in their lives. They felt like a lot of the advice they had heard was generic and wanted to hear from real teens experiences. Lastly, we heard that teens are generally shy about using the phone and would be more comfortable using something familiar like social media. 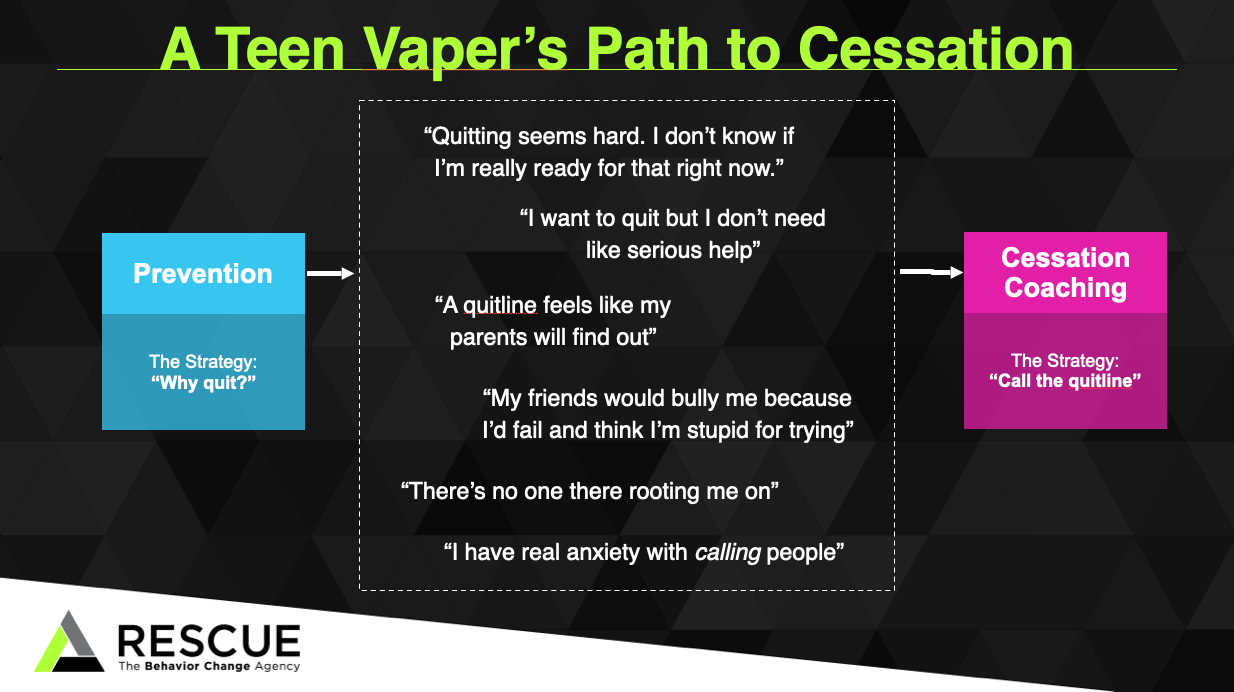 To address the gap between wanting to quit and signing up for a quitline, we created Quit the Hit. This is an online cessation support group for teens who want to quit vaping that is hosted 100% on Instagram. Each group includes 10-15 teens and active moderation from a cessation coach. We provide 30 days of online quit support with daily educational content, group challenges, and access to both peers and a coach for support through the quitting process.

Each of these program features were designed to provide a real human connection with peers and a coach, on social media, and a little more “informal” as they are getting ready to quit. Recruitment for the program can be tailored to reach priority populations who have been disproportionately impacted by vaping or have less access to services in their communities. 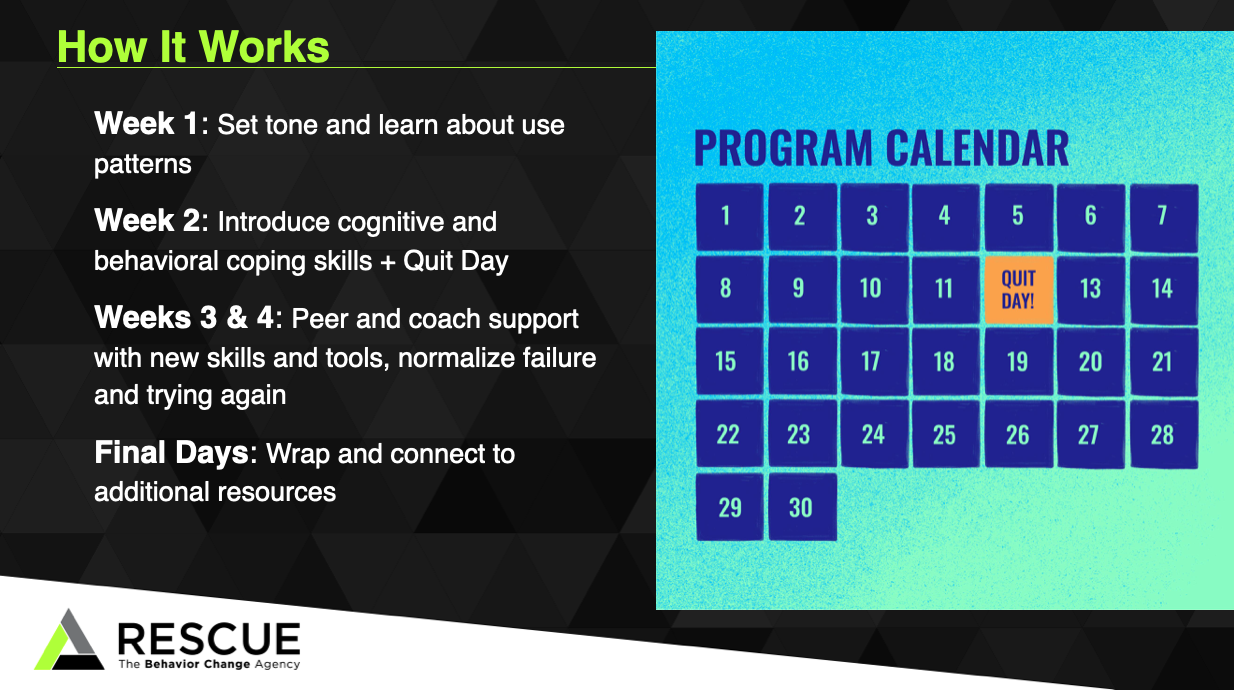 Quit the Hit was created based on 3 NIH-funded and 2 State of CA-funded clinical trials and over 20 papers in scientific literature on social media intervention model. Layering on top of the science, we wanted to represent the lived experiences of teens who vape and want to quit. We engaged with 218+ teens about their lives today. Across both Hopelab-led interviews and Rescue’s formative research with teens, we’ve engaged over 380+ teens with vaping experience. We conducted in-depth co-creation sessions with 9 teens to ensure the teen experience was in the driver’s seat during program development. 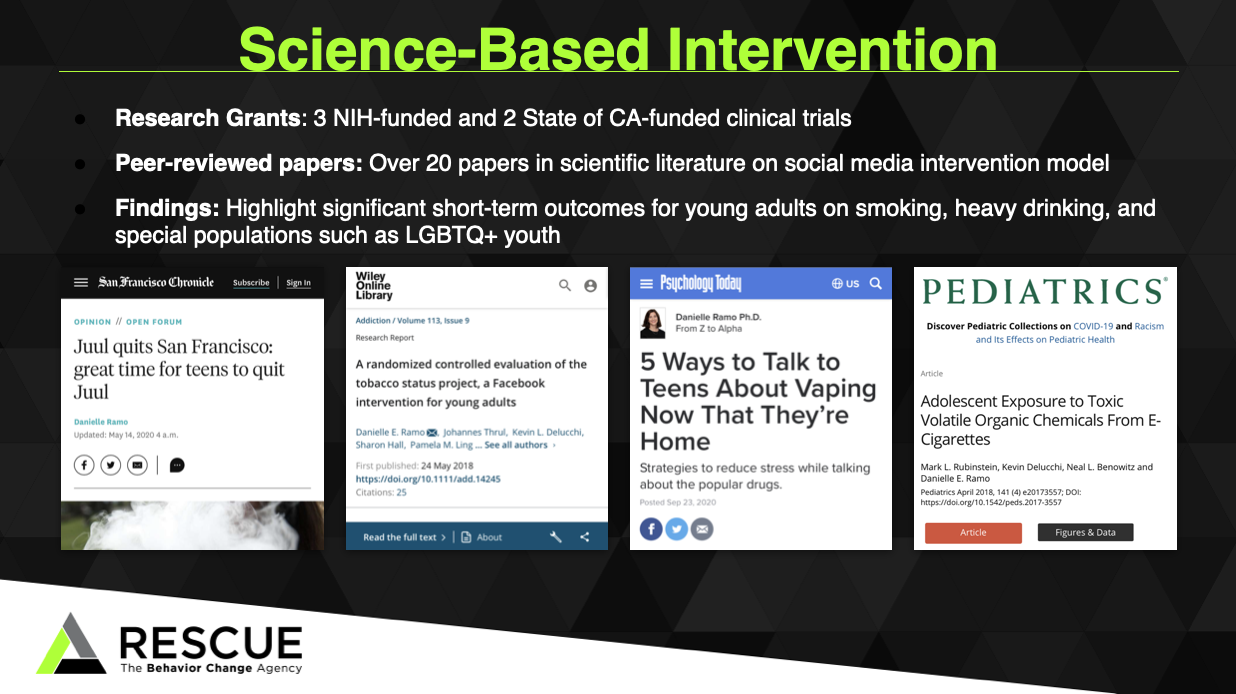